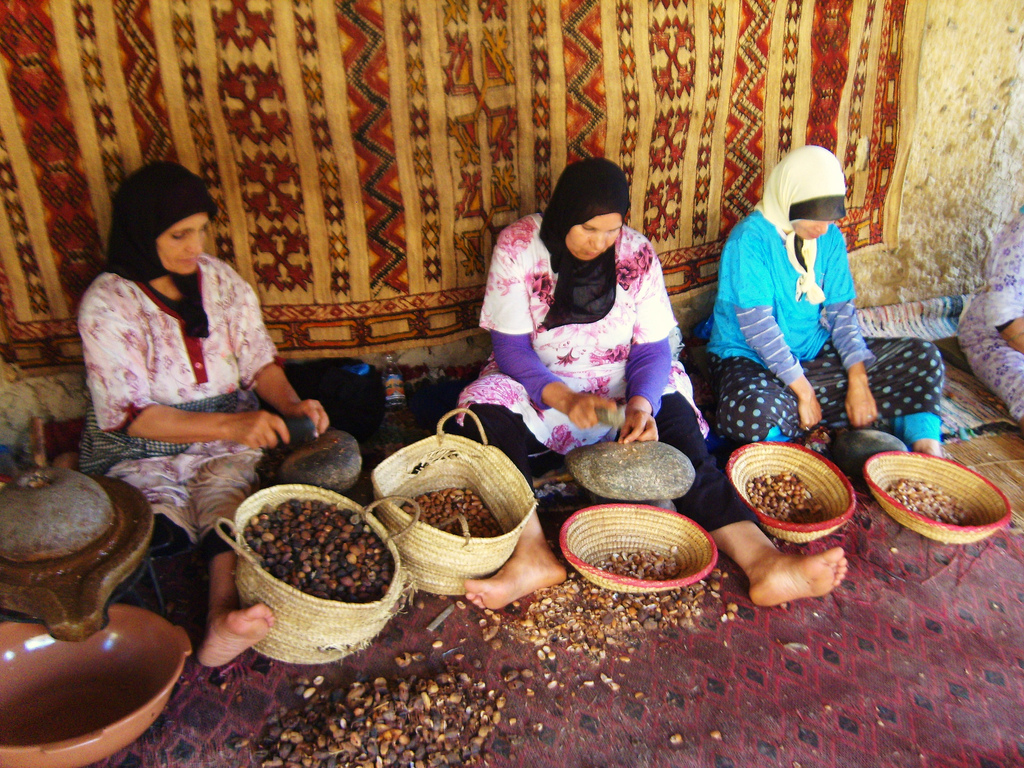 Women processing argan seeds in Morocco. Photo by “Jessica on Paper” on Flickr.

The goal is to reduce CO2 emissions by some 938,000 metric tons a year. It is reported that the IFC has identified $68 million in green investment opportunities in Morocco alone. Mouayed Makhlouf, IFC Director for the Middle East and North Africa, said: “Addressing climate change is a priority for IFC in the region and Morocco is an active player in this area.” “By building on our long term partnership with BCP, we aim to encourage more private sector investment in long term renewable energy projects, paving the way for more sustainable economic development and growth.”

Islamic finance is taking shape in Morocco. In a recent interview in the Gulf Times, Abdulbasit Ahmad al-Shaibei, the CEO of Qatar Islamic Investment Bank (QIIB), spoke about his company’s intention to open 10 branches in Morocco by the end of the summer. QIIB is one of the five approved partners for introducing Islamic banking into the Kingdom. The bank brand is Umnia Bank, and al-Shaibei is bullish on Morocco as a gateway to North Africa.

“There is a huge potential for Islamic banking in North Africa. There is a huge market waiting to be tapped in North Africa, which is in need of Shariah-based, value-driven banking,” al-Shaibei told Gulf Times. Umnia Bank is the result of a partnership among QIIB, Credit immobilier et hotelier (CIH) and Moroccan Deposit and Management Fund. Its plan is to expand in key cities, offering innovative products beyond deposits and savings, which include banking solutions, financing, and investments. It sees a potentially broad client base beyond government projects, using sukuk, Islamic bonds, to finance projects that will add value to the economy by catering to those who currently do not deal with conventional banks because of restrictions on borrowing based on interest repayments.

As part of its long term financial sector reforms agreed with the IMF, Morocco will shortly announce its plans for liberalizing its currency, the dirham. Since Morocco has solid foreign reserves, a balance in currency accounts, and gradually improving public finances, it is ready to move to a flexible exchange rate to be followed by other reforms including inflation targeting. Currently, the dirham is fixed to a peg weighted 60% to the euro and 40% to the dollar. Easing that peg will allow the dirham to trade in a gradually expanding range vis-à-vis the global market.

As the currency begins to fluctuate in response to the market, it is expected that the central bank will introduce hard currency interbank trading and use foreign reserves to insure liquidity in the system. But Morocco has done more than other North African countries to adopt economic reforms, curbing its deficit, ending fuel subsidies, and freezing public sector hiring. According to Reuters, “Aleksander Berentsen, a University of Basel professor of economic theory, said Morocco’s macro-economic stability meant it was a good moment to liberalize the dirham and the central bank was in a position to adjust to changes. It’s a recipe for success.”

Go ahead, try argan oil for a change. Markets are growing for the nutty liquid that has become a byword in everything from cooking to cosmetics. Some claim that it has been used in regional cooking since the Middle Ages, eaten with bread or as a garnish for tagines and couscous.

Argan is rich in vitamin E and fatty acids, making it one of the most sought-after and costly cosmetic ingredients in the world. Until the end of the last century, extracting the oil was an arduous process, and now the process has been partially mechanized, making it into an industry that is paying dividends for the many women’s cooperatives that are the backbone of the sector.

Today, this “women’s work” has enabled the more than 150 cooperatives, employing thousands of women, to emerge as a genuine economic force in the southwest regions who, until now, had few options other than raising livestock or household farming.  Another major benefit of this industry is that women are in charge, despite early resistance from men, and are gradually transforming the economic landscape in the region through empowering women and building role models for young women.

MASEN visits Sweden to promote renewable energy collaboration. The growth of potential cooperation in renewable energy projects was underscored in recent meetings of a Moroccan delegation to Sweden headed by the President of the Moroccan solar authority MASEN, Mustapha Bakkoury. The delegation met with the country’s energy agencies and several companies to discuss current and potential collaborations.

The visit was in response to an invitation from the Swedish government, which wants to take advantage of Morocco’s leadership in the field of renewable energy and pair it with innovative technologies being developed in Sweden. Among the companies visited was Cleanergy AB, a private high-tech firm specializing in the application of Stirling engine-based renewable energy solutions.

Among the topics discussed were Sweden’s energy goals and the role of renewable energies in its strategy; Morocco’s goals in becoming a global leader in the sector; and, potential areas for collaboration. Cleanergy provides concentrated solar power (CSP) technology to Morocco, which is the operating system for Noor 1. The next step is for the partners to “launch collaborative innovation activities on thermal energy storage systems” throughout the Africa market, according to a company statement.