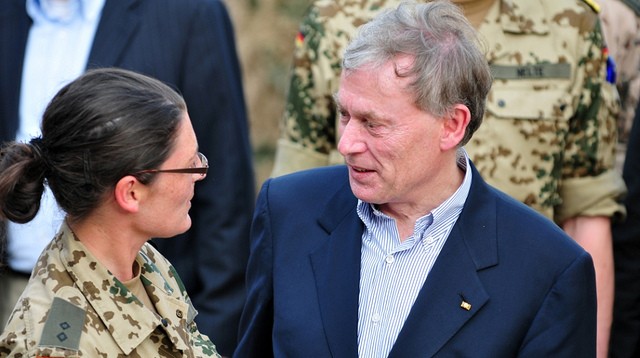 Former German President Horst Kohler has just made his first visit to the Maghreb as the UN Secretary General’s new Personal Envoy for Western Sahara.  We all wish Mr. Kohler success in his mission to help the parties find a “mutually acceptable political solution” to this 40 plus-year-old dispute. But, optimism, indeed even hope, needs tempering here, considering the long record of repeated failures in this seemingly intractable conundrum.

Hopefully, Mr. Kohler will bring some new energy and fresh insight to the effort of finding an approach that bears some prospect of breaking the logjam that has stymied his several predecessors.  However, it is clear that he will need to deal with many of the same “givens” that have nourished the status quo for decades, none of which show any signs of abatement.

Morocco continues to offer a broad autonomy to the region in exchange for an endorsement from the international community of its sovereignty in the Sahara, while Polisario and their Algerian backers continue to insist on a referendum on independence with a much circumscribed list of eligible voters.  Two incompatible positions that remain as far apart today as they did nearly two decades ago when Washington first began to float the autonomy idea as a viable option.  Unfortunately, after floating the idea and subsequently offering verbal endorsements of the current Moroccan autonomy proposal, Washington has been content to allow the stalemate to continue rather than add any serious muscle to its diplomacy.  And therein lies both the problem and proximate cause of the repeated failures of Mr. Horst’s predecessors.

The problem in Washington is that no one with decision authority in the Executive Branch of the last several US Governments has been willing to commit the working tools of US diplomacy to persuade Algeria and Polisario that the US is prepared to take tangible actions to back up its verbal endorsements of Morocco’s autonomy proposal as the way out of this problem.

Make no mistake here about where Washington does and does not stand on this issue. US diplomacy may not be willing to demonstrate through any tangible action that it is prepared to support, in both word and deed, the Moroccan proposal, but neither is it prepared to do anything that might lead to the creation of another failed state in the Maghreb. That is the last thing US policy makers want in the Sahara/Sahel these days.

Algeria likely looks at US diplomacy’s preference for stalemate as a win for them in their never-ending effort to discomfort Morocco.  Blocking Moroccan goals is always sufficient for Algeria, whatever the issue. But Algeria’s objectives do not entirely coincide with those of Polisario, which apparently continues to believe that they can somehow, someway, someday persuade the Americans to turn their backs on centuries of good relations with Morocco and help them steal a territory to which they have no legitimate claim. It is hard to believe that they can persist in this fantasy, but they do.  In any case, even if they do not actually still believe, it is not as though they have alternatives. They live at the sufferance of the Algerians, who remain content with current circumstances, and who also likely understand very well why the US continues to prefer a stalemate to any real movement towards the only viable solution available.

If he has not done so already, I certainly hope that Mr. Kohler will have a thorough and candid discussion with senior US diplomats in Washington and New York about the fundamentals of the US assessment of the problem in Western Sahara and their appreciation of how US interests are involved. I emphasize candid.  I also look forward to his successful effort.  I do not share the view that this is a can susceptible to endless kicking down the road.