On November 6, 2017, Morocco’s King Mohammed VI delivered his annual speech marking the anniversary of the Green March, as follows: 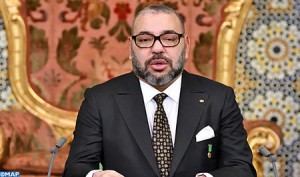 “Praise be to God

May peace and blessings be upon the Prophet, His Kith and Kin

Why am I alluding to these two historical events? And what is the connection between them?

What these two events have in common is the unshakable covenant binding the Throne and the people together when it comes to the nation’s territorial integrity, particularly with regard to the Moroccan Sahara.

The historic speech at M’hamid al-Ghizlan is highly significant for several reasons. Not only does it represent a milestone in the completion of our territorial integrity, but it also confirmed a basic fact which no one can deny, namely the Moroccanness of the Sahara and the Moroccan people’s unwavering commitment to their land.

• And before the question of the Sahara was tabled at the United Nations in 1963;

• At a time when no claims had been put forward regarding the liberation of the Sahara, except for Morocco’s legitimate demands;

• In fact, even before Algeria became independent;

Before any of the above happened, my grandfather had reiterated Morocco’s historical and legal rights in respect of the Sahara, when he solemnly and publicly declared to the representatives of the Sahrawi tribal sheikhs, who swore allegiance (bei’a) to him, that he would continue to work to recover the Sahara, in keeping with Morocco’s historical rights and in accordance with the will of the region’s inhabitants.

That statement, pronounced in those circumstances, needs no further comment; nor can anyone dispute its credibility. It conveys more than just a commitment; in fact, it epitomizes the covenant that binds the Throne and the people.

It also confirms that the Sahara had always been Moroccan before the artificial dispute over the territory was fabricated. The Sahara will remain Moroccan until God inherits the land – whatever sacrifices may be required.

Loyal to that sacred covenant, and based on the above-mentioned historical and political legitimacy, my revered father, His Majesty King Hassan II – blessed be his soul – aptly devised the Green March to recover our southern provinces.

Following in the footsteps of both my grandfather and my father, with the land having been liberated, I have continued to uphold the same commitment to make sure our citizens in those territories are honored, promote development in the region, free our brothers and sisters in the camps and ensure those territories are fully integrated into the motherland.

Upon my accession to the throne, I pledged before the Almighty and before you to make every effort to defend our territorial integrity and to enable our people in the Sahara to lead a free, dignified life.

I have consistently sought to make sure the efforts we make at the international level to defend our legitimate rights go hand in hand with those we make at home to achieve development, in a spirit of solidarity and national consensus.

At the international level, Morocco remains committed to engaging in the current dynamic wished for by His Excellency Mr. Antonio Guterres, Secretary General of the United Nations Organization, and to collaborating with his Personal Envoy, while keeping in mind the need to adhere to the related firmly established principles and terms of reference on which the Moroccan position is based. They include the following:

• Firstly, ‘No’ to any solution to the Sahara question other than within the framework of Morocco’s full sovereignty over its Sahara and the Autonomy Initiative, which has been declared serious and credible by the international community;

• Secondly, draw lessons from past experience, for the problem is not so much finding a solution as determining the process that produces it; for this reason, all the parties that have concocted this dispute must fully shoulder their responsibility in order for a final solution to be reached;

• Thirdly, ensure full compliance with the terms of reference adopted by the UN Security Council when addressing this artificial regional dispute, for the Security Council is the only international body tasked with overseeing the settlement process;

• Fourthly, outright rejection of any transgression or attempt to infringe on Morocco’s legitimate rights or its best interests; rejection of any obsolete proposals designed to divert the settlement process from the set terms of reference, or to introduce or impose other issues which are dealt with by other relevant bodies.

At the national level, I have said on many occasions that we will not sit by and wait for the desired solution to be found. Instead, we will press ahead with our endeavors to promote development in our southern regions and offer our populations there freedom and dignity.

In this regard, we shall continue to apply the development model specifically designed for these regions and seek, in parallel, to implement the advanced regionalization plan, which will enable the inhabitants of the region to run their own affairs democratically and to contribute to its development.

The projects I have launched, and those to follow, will turn the Moroccan Sahara into an integrated economic hub that will enable the region to play its role as a link between Morocco and countries further down in Africa. It will also serve to connect the countries of the region.

As I have stressed before, this development model is not just about the economy. It is an integrated societal project aimed at ensuring human fulfilment, preserving people’s dignity and making sure man is front and center in the development process.

For this reason, the model lays special emphasis on the preservation of the Saharan cultural heritage. I know personally how much that heritage means to the people of the region.

I therefore care deeply about the Hassani culture and see to it that it is properly showcased, by providing the cultural amenities and facilities required, promoting artistic initiatives and events, and honoring the men and women involved in culture, creativity and the arts.

Needless to say, I am keenly interested in promoting all the components of our unified Moroccan identity. In my view, there is no difference between any of the cultural and linguistic characteristics across Morocco’s regions – in the Sahara or the Sousse region, in the Rif region, the Atlas mountains or the eastern part of the country.

However, caring about the local cultural heritage does not mean promoting intolerance or reclusiveness, nor should it be a pretext to foster extremism or separatism. Rather, promoting the local heritage is a means whereby we show how proud we are of our cultural diversity and of all the components of our national identity, in a country which fosters unity among its regions.

It is our collective duty to safeguard this national cultural heritage, to preserve its components and to promote communication and interplay between those constituents while being open to universal values, to other civilizations and to the knowledge and communication-based world.

As we commemorate the anniversary of the Green March and reminisce on the M’hamid al-Ghizlan Speech, we should draw inspiration from the ideals of true patriotism, from the spirit of loyalty to the nation’s sacred values and from sacrifice for the homeland.

It was thanks to those values and to national mobilization across the board that Morocco was able not only to recover its southern provinces, but also to press ahead with its endeavors to achieve progress and keep moving forward.

We need to remember those values today and to embody them everywhere – at school, in families and in society – in order to rise to the internal and external challenges our country is faced with.

I should like, in this regard, to say how proud I am of our Royal Armed Forces and of all our security services, and how much I appreciate their action, sacrifice and constant mobilization, under my leadership, to defend our nation’s territorial integrity and ensure security and stability.

This is also an opportunity to reiterate our commitment and increase our mobilization for the achievement of comprehensive development in all the Kingdom’s regions, especially in our southern provinces, inside a united country that guarantees freedom, dignity and social justice for all.

I can think of no better tribute to the memory of the heroes of the liberation and of independence – chief among whom was my venerable grandfather, His Majesty King Mohammed V – may he rest in peace; nor is there a loftier expression of loyalty to the oath of the Green March, to its architect, my revered father, His Majesty King Hassan II – may he rest in peace – or to the worthy martyrs of the homeland.