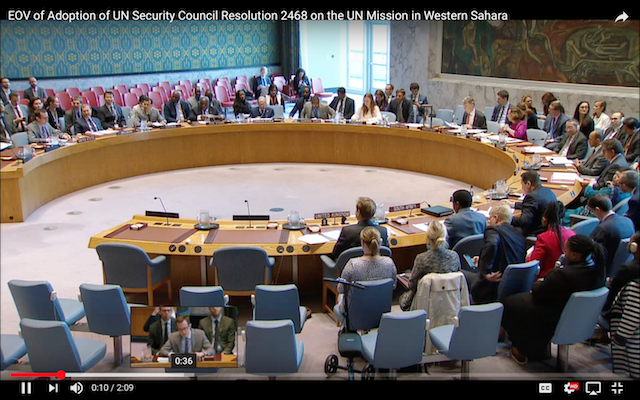 The Security Council has again renewed the peacekeeping mandate for Western Sahara, MINURSO, for another six months. It did so without the votes of Russia and South Africa, both of who abstained.

As my colleague Ambassador Ed Gabriel said in an article last week in these pages, the resolution could have been written beforehand by most any frequent observer of events in the region. It contained no surprises.

What it did contain once again were repeated exhortations about the need for compromise, realism, and pragmatism among the Parties in the search for a mutually acceptable and sustainable political solution. This is also not entirely new. The Security Council has been urging the need for a reasonable approach for a long time, not that Algeria or the Polisario have paid much attention.  Unfortunately, the Russian and South African choice to abstain will likely encourage both Algeria and the Polisario to remain intransigent at the next meeting of the Parties, wherever and whenever that might be.

This is the third six-month renewal of the MINURSO mandate. If the purpose of these shorter renewals is to pressure the Parties to become more flexible in their positions, it is clearly not producing that result.  And while there is no longer any specific reference to holding a referendum on independence, this latest vote In the Security Council once again put the Moroccan autonomy initiative on the same diplo-speak footing as the Polisario’s stale ideas by only “taking note” of each. It does “welcome” Morocco’s “serious and credible” efforts to contribute to moving the political process forward, but no longer “welcomes” specifically the substance of the Moroccan initiative. That is a step back and it is counterproductive to the need for the Security Council to speak clearly to define what it means by terms like compromise, reasonable, pragmatic, realistic, and sustainable. Until it does, one should not expect that further roundtable discussion among the Parties will produce any more progress than what we see already.

However, following the Security Council vote, there was something very new and encouraging in the statement of the United States delegation to the United Nations.

In his statement, Rodney Hunter, speaking for the US Delegation, is quoted in the press saying that “the goal of the Security Council should be to propose a timely and mutually acceptable political solution.”

Assuming Mr. Hunter was not misquoted or misspoke in his comment, this is new territory and deserves further attention.

I have argued both on these pages, and elsewhere, over the last several months that the United States needs to be clear in support of its declaratory policy supporting the Moroccan autonomy initiative through both words and deeds, and that the Security Council needs to table its own compromise proposal as the basis for negotiations. In this regard, Mr. Hunter’s statement is, hopefully, a first step in this direction. Time will tell. I will be looking to see if the United States takes other consistent steps in this direction, but this is the most encouraging development I have seen in the last several years.

The mechanics of getting a new compromise proposal to a consensus vote in the Security Council will be difficult and a challenge for US diplomacy, but if Washington is serious about moving beyond the status quo, and is not surreptitiously engaged in some byzantine diplomacy to simply blow up the UN political process and dump the MINURSO mission, then the US needs to accept this challenge and follow up these encouraging words with clear bilateral statements and the kinds of further steps I have encouraged to give their diplomacy a serious chance of success.