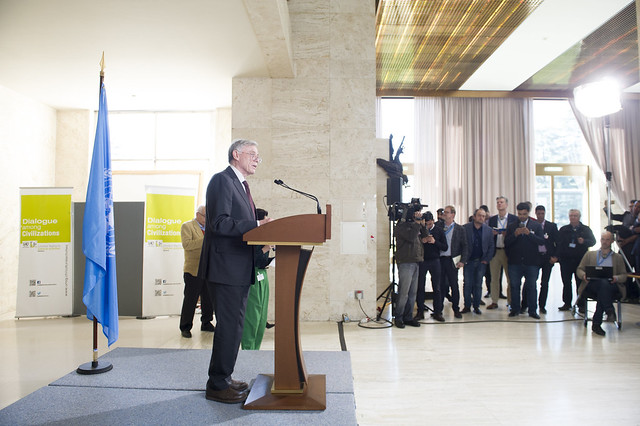 Personal Envoy of the Secretary-General for Western Sahara, Mr. Horst Köhler speaks to the press at the end of the roundtable on Western Sahara, Palais des Nations. 22 March 2019. UN Photo by Violaine Martin

Who would want the job? Still, I suppose someone has to do it.

James Baker overestimated his leverage, then overplayed his hand.  Peter van Walsum, a serious attempt at stating the obvious, abandoned by a feckless Security Council. Chris Ross, content to nurture the status quo, round and round to everyone’s satisfaction, until it wasn’t. Hans Kohler, barely there before he wasn’t.

So, who would want to follow and flounder in the dismal wake of all that?

What should the next prospective candidate for Personal Envoy of the Secretary General take away from the collective failure of his predecessors before accepting the job?

If I could offer the candidate a single bit of advice, it would be this – before accepting the job, before talking to any of the Parties, first make the rounds of the Secretary General’s “Friends of the Sahara” group and determine whether any of them is serious about resolving the issue anytime in the near future and, if so, and this is key, whether there is anything resembling common ground among them to work with. Do so with clear eyes and a discerning mind, because without some clear and common resolve among this group, there is little hope that the next Personal Envoy is going to have any better luck than Baker, van Walsum, Ross, or Kohler.

I think the odds are slim that the next prospective Personal Envoy will find a satisfactory answer to that question.

Washington seems to be the only capital in the group looking to replace the status quo with something else. But it is far from clear that Washington’s “something else” is a solution to the problem in Western Sahara as much as it is a solution to Washington’s desire to strike a blow against the perceived inefficiency of UN peacekeeping operations.  That impulse is clearly driven from the National Security Council. As for the State Department, there is no sign of any new thinking on how to transform the status quo into something more positive.

Moscow will continue to support Algeria’s intransigent unwillingness to compromise. The UK has no real stake in the outcome and cannot be counted on to support any new initiative that does not already have consensus support within the group.  Madrid needs to maintain Moroccan cooperation on its immigration and counter terrorism problems.  Paris will continue to have Morocco’s back. These are not encouraging prospects for consensus within the group.

And the alternative? Not to replace Mr. Kohler? Upturn the apple cart and just walk away? Seems unlikely. Even the status quo is better than that.