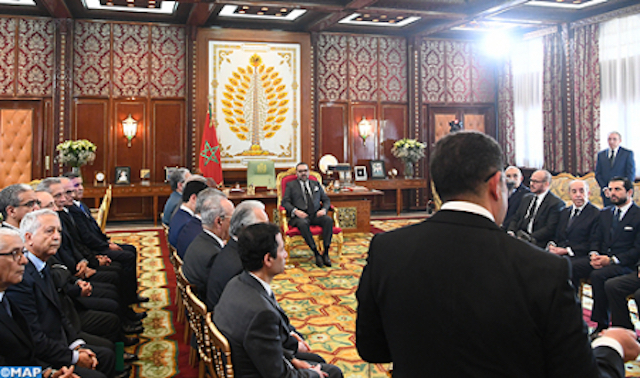 King Mohammed VI chairs a presentation session of the roadmap for the development of vocational training and the creation of ‘Cities of Professions and Skills’ in every region of the Kingdom Photo: MAP

On July 29th of this year, the twentieth anniversary of the enthronement of King Mohammed VI of Morocco, I published an article focusing on his first twenty years as king, recalling the vision he set forth in his earliest speech, as well as discussing his achievements and continuing challenges, which I said rested mainly in his hands.  I also noted that, in spite of the mostly ill effects of the Arab Spring in the region, Morocco has made enormous progress, due mainly to the Kingdom’s independent and early decision to pursue democratic reforms.

This article is a follow-up, suggesting an agenda for the next twenty years.

In his Fête du trône speech this year, King Mohammed provided his own assessment of the past twenty years and his vision for the next chapter of his reign.

He emphasized his commitment to his people and country as a monarch who serves their interests, and renewed his firm believe in the democratic process: “there is the democracy and development-based policy, which I have been implementing resolutely and confidently.” Recalling the “quantum leap” in infrastructure development and “undeniable progress in promoting (human) rights and freedoms and consolidating sound democratic practice,” he added that such progress is undermined because it is not felt by all segments of the Moroccan society.

The king vowed “to press ahead with the process of building modern Morocco and to overcome the difficulties faced.” He reviewed the economic development progress of the country, his aim to establish an open, decentralized and participatory government, his commitment to Morocco’s stability and security, and Morocco’s adherence to international laws.

He stated the importance to become more outward focused “to gain international experiences and best practices”, and stressed the need to improve institutional efficiency, to incentivize private sector entrepreneurship, and to launch “new programs for productive investment and … more jobs.” He underscored these challenges along with a commensurate need for social and regional justice to create opportunity and equality for all.

To spearhead this effort, the king announced the formation of an ad-hoc committee, to begin work in the Fall, with members from “various fields of knowledge and intellectual currents, including prominent Moroccans from the public and the private sectors who meet the requirements of competence and impartiality, who are able to feel the pulse of society, who understand its expectations, and who have the nation’s best interests at heart.”

This is a tall order but one King Mohammed seems determined to achieve. The international community will watch closely to see if he will follow through on his statements and vision. The challenges he faces are enormous: to increase the security, prosperity, health, education, and socio-economic conditions of all Moroccans. What will it take to mobilize the people, parties, parliament, and government to implement and further define his vision?

Morocco starts the next twenty years with several big advantages and is blessed with a monarch who is progressive and caring. This puts the king in a position to set a vision and channel the input of private, public and non-profit stakeholders in one direction: to support a modern, growing country that protects the equality of its citizens and provides opportunity for all.

He doesn’t have to put up with bureaucratic warring among political parties who will debate their future and vision. As king he is able to lay out a vision and set forth a constructive roadmap for the Moroccan government to follow. An absolute ruler with questionable motives could lead a country into disastrous consequences. Morocco however has a leader who has dedicated his life to the betterment of his people, much like that of Lee Kuan Yew of Singapore, and like Lee, he enjoys high favorability among his citizens.

Furthermore, the country’s “irreversible” and undeterred decision to pursue a stable, democratic model early on was key in showcasing the country as a worthwhile US and European investment in the Middle East region. This created a new sense of importance for Morocco with its US and western allies in the post-cold war era, supplanting the old cold-war anti-Soviet agenda.

Morocco is also strategically located, which makes it an important and consequential country to Europe, the United States, Africa, and the Middle East. King Mohammed’s pivot to Africa was genius in creating new markets for Moroccan products and building long-term strategic alliances. And Morocco is a big fish in the African pond, more equal in importance to other African countries than it is to Europe and the United States.

The king also has done a remarkable job in diversifying an economy, which was based on agriculture and phosphate mining twenty years ago, and now has a solid track record for attracting manufacturing and foreign investment in diverse sectors. Of significance, Morocco is among the safest and most open societies of the Middle East, serving as an attractive corporate base for ex-pat business executives and regional offices. All of these factors create some space for succeeding in the next twenty years.

One of the first signs of change will be how the king modernizes the function of the Palace. The challenges for Morocco are huge and he should expand the circle from which he receives information and expert advice even more. Many Moroccans, especially his contemporaries, are in an uncomfortable relationship as friend and subject, which can hinder their ability to objectively advise him.

The relationship of the Palace to the Moroccan government is somewhat similar to the relationship of the White House to the US government agencies. The latter has an important coordination role on all major issues, through the workings of the National Security Council and its NSC Adviser. Separately, the US president has a chief of staff and various advisers to coordinate government actions and ensure that his vision and the laws and policies of the country are being properly carried out. The Palace should do a top down review of its operations and create more efficient roles and responsibilities for advisers who can manage a staff of experts to oversee the vision of the king.

Ensuring that all Moroccans benefit from economic growth will require developing a strong middle class and increasing the rate of economic growth in non-agricultural sectors. This will require government policies and a government responsive to the entrepreneurial needs of new entrants into the market, including ease in qualifying for loans and efficient government registration and processes that encourage innovation and risk taking from anyone who objectively qualifies.

Such an effort is naturally connected to the rule of law and an independent judiciary. More than anything else, an independent, transparent, and competent judiciary can solve many of Morocco’s problems: ease and clarity of doing business, trust that private assets are protected, ability of small businesses to seek fairness and equality, and the belief that government institutions will aid in enabling new projects, rather than being obstacles, as they sometimes are now. As the King said, civil service should be based on merit. More transparency and protections against corruption will attract foreign and domestic investment leading to greater diversification and jobs.

No country will advance to a developed status without an educated populace and good health care, both of which are lacking in Morocco. King Mohammed has emphasized the importance of overcoming deficiencies in both sectors, areas where countries with best practices are willing and ready to apply their services in Morocco.

Morocco should be open to incentivizing and encouraging US and European university hospitals to move to Morocco to create institutions and partnerships. Education should be allowed to be more competitive, and the country should encourage international curricula offered by US schools to be established, which offer technical training, research, science, and higher educational opportunities. English language competency is most important, and should be a mandatory requirement, as it is the language of business, technology, and science.

Morocco should also learn from its past. The most successful privatization was the selling of the second telephone license and creation of the telecom regulatory agency, ANRT. Today, Morocco has 20,029 million mobile subscribers, up from 16,005 million at the end of 2006 and 2,550 million in 2000. Mobile penetration has reached 65.66% of the population, and only about 4% use billed services, while the rest are prepaid. And as a result of the establishment of an independent telecom regulatory agency, consumer pricing has been significantly reduced with several competitive options now offered to the public.

The creation of “independent” regulatory agencies has proven to solve many of the business related obstacles of doing business, and offers an efficient alternative to bureaucratic government agencies charged with the same responsibility.

And while the speed at which democratic openness occurs has to be balanced with concerns for the safety and security of the citizenry, freedom of expression in Morocco seems too stymied for a country doing so well in other areas. A complete review concerning freedom of the press, of association, and expression should be carefully considered and improved. Morocco will never get positive international press when it is interfering with foreign and domestic reporters, and with its citizens who “civilly” demonstrate against the government.

In this regard, civil society in Morocco has been one of its strengths in its push for democracy and social and economic reforms, but this success is from smaller local NGOs, not national and internationally recognized organizations. Civil society organizations have a long tradition there and they can be improved with some creativity and incentives, and can play an important role in the development of the country and its decentralization initiative.

Finally, and most importantly, the Western Sahara issue needs to be resolved sooner rather than later. Continued inaction by the UN to seek a solution among the parties is not sustainable; it only adds to instability in the region and drains much needed resources from productive efforts to advance Morocco’s reform process. Even US policymakers, who are reluctant to support Morocco’s sovereignty-autonomy initiative, admit that such a solution is the only compromise realistically available, and direct negotiations between the parties are the only way to explore an acceptable model within this framework.

And although Morocco has made many overtures in the past, it should take the next step to create an atmosphere for the Polisario and Algeria to discuss its initiative, without preconditions, allowing the UN to reword it as their own, rather than a “Moroccan” one. Regular back channel discussions between Algeria and Morocco could also greatly add to an atmosphere of trust between them.

In the end, I’m left with a positive feeling that King Mohammed VI today is in a much stronger position than he was twenty years ago. Much has been achieved, and, given the strong foundation he has set, as well as the national pride of the Moroccan people and love of their king, the success of the next twenty years is within Morocco’s reach.