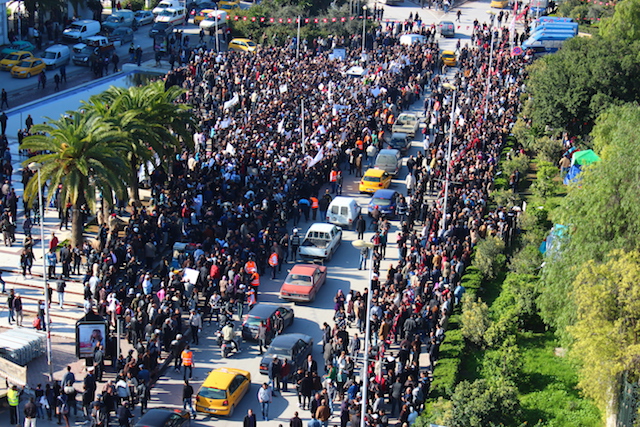 Although it is the birthplace of the Arab Spring and has been called the only country to create a democracy as a result of that disruption, Tunisia still faces very tough challenges in implementing economic and political reforms that will put the country on a sustainable strategy for national development. After nine years, the country still lacks a cohesive political leadership, an economy that functions as an engine of growth and job opportunities, and a strong government bureaucracy that provides essential social, health, education, and welfare services.

The bottom line is that without addressing key issues that sparked the demonstrations and continued unrest, including corruption, a lackluster economy, inequity between the coast and the interior and south of the country, youth leaving the country due to a scarcity of jobs, and poor governance, Tunisia’s hard-won freedoms may be threatened by the emergence of a more authoritarian leadership that promises to fulfill the promises of the revolution.

Regarding the political space, the most pressing problem is how to build a cohesive culture out of a fractious electoral system that has no bar for qualifying parties or lists. As a result, the current Parliament, which had already rejected one proposed cabinet, is made up of 31 different parties or electoral lists. Even the largest parties, Ennahda and Qalb Tounes, received only 24 and 18 percent of seats, respectively. The rejection of the first proposed cabinet caused three months of delay until PM Elyes Fakhfakh succeeded in gaining approval, but only after President Qaïs Sa‘id threatened new elections if the new cabinet was not supported.

An article posted by the Carnegie Endowment Middle East noted four areas that must be addressed for promoting economic growth and stability in the long term: education, macroeconomic stability, infrastructural improvements, and fighting corruption. The COVID-19 pandemic has only exacerbated the economy’s fragility since tourism, Tunisia’s top revenue producer, and trade with Europe are on hold as borders are closed and airlines are shut down. In the past, Tunisia could count on Tunisian expatriates’ repatriations, but this is rapidly dwindling as the Gulf and EU economies where most Tunisians work are shut down, severely limited, or victims of the drastic fall in oil prices.

Regarding macroeconomic issues, Tunisia’s foreign borrowing has risen from 50% of the GDP in 2010 to 99.4% of GDP in 2018 with gloomy forecasts for 2020 and beyond. In addition, Tunisia is still burdened with obligations of a $2.8bn loan from the IMF, which imposed various austerity measures on the government at a time in which it needs funds to stimulate the economy and reduce government debt.

Al-Monitor reports that public confidence in the country has fallen along with its economic indicators. “Tunisian polling company Sigma Conseil’s recent polls of Jan. 25 showed that 75.5% of Tunisians believe the country was on the wrong path,” the article further noted; which also pointed out “A March 4 paper by the International Crisis Group cautioning the Tunisian government of the urgent need to address the economy and rapidly improve public services if it is to regain public confidence and avoid a descent into populist extremism.”

Internal squabbling within political parties and a government with ministers from parties and lists that often disagree is another challenge in passing badly needed legislation. Most of the tension, Al-Monitor reports, results from perceived failures of previous governments to address the social and economic needs of the country and what is perceived as stagnating leadership. Without several strong partners to provide leadership in Parliament, Tunisia runs the risk of further deterioration, exacerbated by the pandemic.

COVID-19 is already diverting resources from an already fragile public health system as the country scrambles to isolate and diminish the outbreak. Tunisia hesitated at first to close its air and sea links, which allowed for an inflection in the number of cases, leading to the claim that one of the sources of the virus in Italy was said to be a Tunisian returning to Italy. The number of confirmed cases has risen to 173, even with a curfew imposed the week of March 17, and a general lockdown on March 22 limiting travel outside the home to buying necessities. Further cases are to project since reporting mechanisms are not fully reliable and testing has only begun.

Even before the pandemic, The Carnegie Middle East Center indicated, “Much of the public’s frustration with the political class stems from the inability of democratically-elected figures to deliver positive social and economic change to the Tunisian people… Food prices have increased at a rate of 7.3% per year, with vegetable prices increasing by more than 10 percent and milk by more than 9 percent. Additionally, unemployment remains high, particularly among university graduates at 28 percent. Women are disproportionately affected, with 38 percent of female university graduates unemployed.”

The educational sector has become an issue even though Tunisia has always counted on its human resources as a primary asset. The decline in the quality of public education and technical and vocational training schools, and funding for research centers and universities are hindering its continued excellence. The continued marginalization of the interior regions of the country continues to fester as young Tunisians face shrinking opportunities at home and overseas. “Additionally, since the uprising, the country has witnessed an unprecedented brain drain. Ninety-five thousand people have left Tunisia, 84% of who were highly educated. This includes doctors, engineers, computer scientists, and university professors,” according to the Carnegie account.

One potential support mechanism would be expanding the Free Trade Agreement with the EU that would open markets to more Tunisian exports and bring vital technical and scientific assistance to improve trade procedures at customs and other trade agencies. Time is short. Given lingering economic and political issues, the need to address economic stagnation and corruption, and the unforeseen impact of the COVID-19 pandemic, Tunisia and the rest of North Africa face significant challenges. All of the recovery scenarios are complex and will require the same kind of collaboration and commitment that brought the Nobel Prize to Tunisia’s revolution.