Last week saw an extraordinary uptick in the visibility of the US-Morocco relationship. King Mohammed VI met with President Obama on Friday, and the Moroccan delegation that arrived earlier in the week had a full agenda of meetings and events that underscored the dynamism and momentum of the two countries’ strategic partnership.

While much has been made of the four-page length of the joint statement released by the White House, what was most impressive was the substance of the text, which got rave reviews in the US and Morocco.

The text is different from many communiqués that are replete with platitudes and diplomatic niceties. It spelled out specific programs, initiatives, and understandings that have given new life to the Morocco-US Strategic Dialogue and partnership.

As importantly, and in contrast to other trends in the region, “The two leaders also emphasized our shared values, mutual trust, common interests, and strong friendship, as reflected throughout our partnership.”

It is this grounding that is the platform for America’s longest official diplomatic relationship and represents a beneficial alliance that has weathered the stress of recent upheavals in the region.

Although much continues to be written about the political (Western Sahara), security (counterterrorism), and diplomatic (Middle East Peace) references in the statement, I want to look instead at other sections that are at the core of our long-term shared interests.

It is the details of these elements that spell out the engagement and support of the US for the reforms and advances critical to Morocco’s leadership role in the region.

The statement referred several times to Morocco’s constructive response to governance and human rights challenges that are roiling the region. “The President commended the action and the leadership of His Majesty the King in deepening democracy and promoting economic progress and human development during the past decade.”  More than a polite acknowledgement of the King’s role in leading the constitutional reform process, it reaffirmed the US commitment to “help strengthen Morocco’s democratic institutions, civil society, and inclusive governance.” It is instructive that the first section of the joint statement focuses on “deepening the ongoing U.S.-Morocco dialogue on human rights,” noting the continued sharing of views and information. President Obama pointed out that Morocco’s reform initiative on migrants, refugees, and human trafficking was especially welcome and encouraged “Morocco’s intent to take concrete steps to qualify for and join the Open Government Partnership (OGP)” and implement its membership in the Equal Futures Partnership.

While these groups are not on the everyday list of American policy watchers, they are important in linking together domestic reform agendas worldwide. At the heart of the OGP, “government and civil society are working together to develop and implement ambitious open government reforms” in four distinct areas: accountability, technology and innovation, citizen participation, and transparency. It now includes 62 countries that have qualified for membership based on achieving objectives in the four areas. Launched in September 2012, the Equal Futures Partnership  commits member countries “to taking actions including legal, regulatory, and policy reforms to ensure women fully participate in public life at the local, regional, and national levels, and that they lead and benefit from inclusive economic growth.” Building on Morocco’s commitment to equity and equality in the 2011 Constitution, important changes are underway building momentum for women’s participation across all sectors of society.

During the week, USAID announced the latest Country Development Cooperation Strategy (2013-2017) for Morocco focusing on “enhancing the employability of youth; increasing civic participation in governance; and enhancing educational attainment for children at the primary level.” In its statement, USAID pointed out the consequences of poor educational achievement on the prospects of youth, and so will focus on improving reading levels, teaching methods, and learning materials, “and capacity building at the institutional level.” Youth unemployment will be targeted by “enhancing the quality of and improving access to career services… [through] partnerships between the Ministry, Moroccan universities and technical institutes…local NGOs and business associations to develop demand-driven workforce development services…” 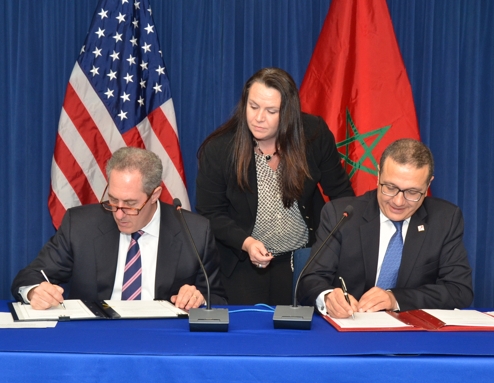 The Trade Facilitation Agreement represents an enhancement to the Morocco-US Free Trade Agreement (FTA) that reforms and modernizes customs procedures and endorses “joint principles on investment and information communication technology services trade,” a sector that was not included in the original FTA yet today is a major growth industry for Morocco.

The latter has particular resonance for US companies that want to base their regional marketing hubs in Morocco, and it also benefits Moroccan firms by promoting increased exports in ICT services to the US.

The two partners agreed that the second Morocco-US Business Development Conference will be held in Rabat in early 2014 focused on aviation, agriculture and food, and energy industries. In addition, Morocco agreed, as was announced in Malaysia, that it would host the 2014 Global Entrepreneurship Summit in the summer of 2014. Both events hold considerable promise for highlighting Morocco’s geo-economic role for doing business into Europe and Africa, as well as allowing the Maghreb countries greater access to the US market.

Focus on Human Development in Africa

Among the several agreements and initiatives concluded during the visit were commitments to further the regional human-development agenda. In their review of their shared interests in development in Africa, “both countries committed to explore joint initiatives to promote human development and stability through food security, access to energy, and the promotion of trade based on the existing Free Trade Agreement…and committed to explore in greater detail concrete options for pragmatic, inclusive cooperation around economic and development issues of mutual interest.”    Morocco’s existing social and human development programs in Africa provide a ready-made opportunity for the US to advance common interests by utilizing Moroccan expertise and networks in the region—a  win-win-win proposition for the US, Morocco, and African countries.

The many implications of these and other programs and initiatives coming out of the visit will become obvious as both countries move forward through the Strategic Dialogue to follow up their goodwill with defined implementation steps. The outcomes that emerge in the coming year will indicate the seriousness of America’s contribution to regional security and stability and the joint commitment of both partners to the way forward for Morocco and the region. The details will be a welcome respite from the otherwise bleak prospects in the region.

Jean,
This is the best summary of the visit I’ve read