* Specialists’ Delegations Find Similar Issues in US and Maghreb *

In December 2010, as part of its program Partners for a New Beginning (PNB), The Aspen Institute, with State Department funding, launched the North Africa Partnership for Economic Opportunity (NAPEO). One of its core efforts is a focus on youth employment and related issues of leadership and entrepreneurism. Over the past three years, delegations have visited Algeria, Libya, Morocco, and Tunisia to have a first-hand look at conditions on the ground, where they were teamed with local partner organizations to assess what “best practices” might be shared to encourage job growth. A goal of NAPEO is to foster the growth of private-public-NGO partnerships to advance economic and human development.

The latest delegation consisted of US community college leaders who met with their counterparts in higher education, vocational and technical training, and business communities.  Last week, delegation members met in Washington, DC to discuss their findings and continue a dialogue on options for collaboration and sustainable solutions. In addition, two members wrote blogs for The Aspen Institute in the HuffPost (Huffington Post) recounting their experiences. 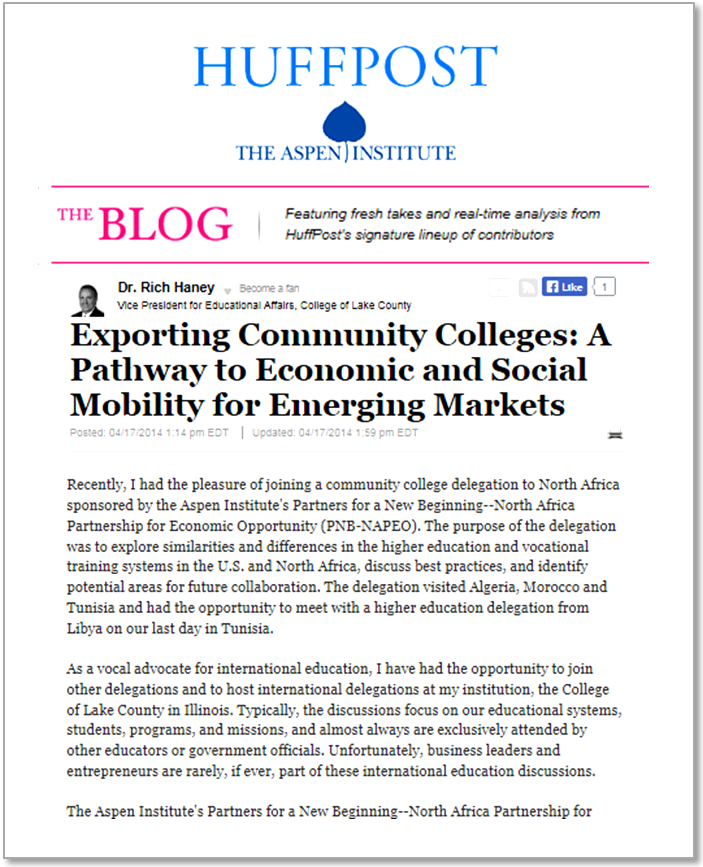 What was particularly striking about the comments of these skilled educators, who were visiting the Maghreb for the first time, were the similar challenges faced by the Americans and their counterparts. For example, the mismatch between education and workplace skills and the need to integrate soft and content/technical skills within programs were consistent themes for both Americans and Arabs. It was pointed out that 60 percent of Americans attend higher education institutions but only 30 percent graduate, which puts a lot of pressure on students to acquire marketable skills for whatever time they invest. Although the percentages for higher-education participation are much smaller in North Africa, the need for being job-ready is equally critical, as the unemployment rate among young people and women exceeds 25 percent across the region.

The Maghreb Agenda – Learning for Employment

The expert panel was kicked off by Josh Wyner, Executive Director of The Aspen Institute’s College Excellence Program. He noted that there are two million unfilled jobs in the US due to the lack of skilled applicants, a situation not dissimilar to that in the Maghreb. He was struck during his visit by the opportunities to work in collaboration on common challenges, such as involving companies in shaping education programs that address market needs.

In her comments, Kathryn Mannes, Senior VP for Workforce and Economic Development at the American Association of Community Colleges, noted that the high degree of centralization in Arab education may inhibit local stakeholders from collaborating in education/training programs that serve local industries. She also mentioned that there is a perception that workforce development — acquiring technical skills while in college or university — is not well regarded in the Maghreb.

Dr. Richard Haney, Vice President for Educational Affairs at the College of Lake County in Grayslake, IL, in his HuffPost blog, mentioned three particular areas for improvement raised by their Arab counterparts: “their ability to train and educate a labor market with skills that are aligned with their local economies…developing the skills and talents of educators…[and] they lacked the basic instructional equipment and technology needed to provide students with the skills required.”

Eamonn Gearon, co-founder and Managing Director of the SIWA Group, which for more than 20 years has been advising clients in the MENA region on operational issues, cautioned that the centralized system is deeply rooted in society and often gives the impression that little can be done rapidly to bring about change.  Mr. Gearon noted that lack of data was a major impediment to business relationships, as companies and governments are reluctant to share information that may be seen as proprietary or critical. He pointed out that there is a great deal of dynamism at the sub-state level where decision-makers are much closer to their constituents.

The need for changing local perceptions about work, learning, jobs, and careers was also mentioned by several of the speakers in the context of building constituencies and stakeholders for better educational outcomes. Russell Beard, VP of Information Resources and CIO at BellevueCollege, pointed out that attitudes toward work are shaped by experiences in the educational system and that building strong ties with industry will give students a better grasp of how education affects their employability.

In his HuffPost blog, Mr. Beard wrote about how the visit to the region affected him. “Seven days that would change my life, shake everything I know and open my eyes to the incredible beautiful world around us…I began to understand that their problems were not that different from ours.”

The program concluded with a lively exchange as the audience expressed their opinions about how to best address four key issues: the benefits and drawbacks of centralization, ranging from more efficient use of resources to not addressing needs of local employers; challenges of integrating work skills and curriculum content to balance the goal of employability with the proven value of soft skills; the role of US institutions as both an adviser regarding “best practices” and as a recipient of alternative solutions that could enable US higher education to become more effective as a multi-cultural learning environment; and integrating stakeholders into the process of education/training, from curriculum to certification.

The delegation was impressed by the optimism and hope expressed by their contacts throughout the Maghreb. And their counterparts are strongly impressed with how the US is addressing employment issues so similar to their own. As Russ Beard wrote “It was crystal clear to me that the people I met saw us as a source of hope, bringing answers to the challenges they are facing in moving their nations to global participation. In us they saw the American dream.” It is perhaps the best that America can offer – optimism about the future and a mutually defined roadmap that enriches both partners.