Al Monitor reports on Morocco’s economic performance and the status of efforts to improve Morocco’s employment through sectoral development: 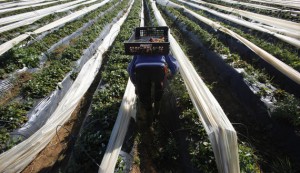 A farmer picks strawberries, to be exported, in a field in the town of Moulay Bousselham in Kenitra province, March 15, 2014. Photo: REUTERS/Youssef Boudlal

Morocco boasts a unique geographical location: It overlooks the Mediterranean Sea and the Atlantic Ocean; it is the closest African country to Europe; and it enjoys close relations with the European Union countries, especially France and Spain.

Significant Moroccan communities exist in European countries such as France, Belgium, Spain and Italy. Moreover, Morocco enjoys political stability, and King Mohammed VI has adopted a reformist approach. His government has sought to develop legislation governing economic activity and has enhanced the potential to create an attractive investment environment. This has reassured Moroccan and foreign investors and encouraged the adoption of numerous projects in vital sectors.

Morocco has a population of 33 million. … Moroccans work in a variety of economic areas, the most important of which are traditional manufacturing industries, agriculture, mining and services. In 2013, the kingdom exported $22 billion worth of products. European countries are the main importers of Moroccan products, with 21% of exports being sent to France and 17% to Spain. Exports include garments and textile products, phosphate, fertilizers, vegetables and fruits…[Full Article]