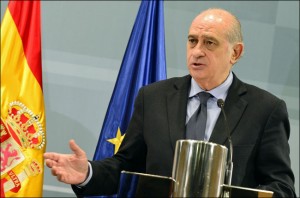 The Moroccan and Spanish interior ministers met last week in Tetouan as part of stepped up co-operation in the fight against violent extremists.

At the end of the August 27th meeting, they issued a joint statement mentioning their “commitment to constantly improving mechanisms for the sharing of information between intelligence services, including in the area of tackling networks that recruit fighters for terrorist groups”.

They also praised the collaboration for producing “convincing results…as demonstrated by the operations to dismantle networks operating in both countries”.

Abdelfattah El Belamachi, the president of the Moroccan Centre for Parallel Diplomacy and Dialogue between Civilisations (CMDPDC), said that even though Moroccan-Spanish relations have at times been frosty on some issues, security co-ordination in particular was one matter in which both parties have a vested interest.

“The problems facing North Africa relate to illegal immigration, trafficking of all kinds… now makes security co-ordination central to the relations mentioned in the latest joint statement published by the Moroccan and Spanish interior ministries,” he said.

He explained that the matters raised in the document show that there was co-ordination at the international level, in which both sides were participating, in order to deal with the threats faced by several countries, especially in the light of the instability in Libya and the emergence of the Islamic State (ISIS).

Morocco has always played its part in international efforts to combat terrorism, but security vigilance was stepped up after the 2003 Casablanca bombings, El Belamachi said.

“This resulted in the dismantling of terrorist cells that were planning operations in Morocco,” he told Magharebia…[Full Story]