Magharebia reports on the success of the ‘Forsa Mentoring’ program in Morocco which is helping to promote skills and confidence in young Moroccans: 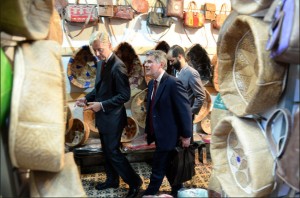 Learning the ropes from an expert had a big impact on business, young Moroccan entrepreneurs said Thursday (September 9th) in Rabat.

They were gathered at the residence of British Ambassador to Morocco Clive Alderton to offer their review of the “Forsa Mentoring” program.

The 10-month project offered coaching and guidance to some 140 young men and women, in sectors ranging from skilled trades to new technologies.

As part of the initiative organized by the British Embassy, the Centre for Young Business Leaders (CJD) and the Mowgli Foundation, professionals in various industries worked hand-in-hand with the young people.

Participants project an average sales increase of more than 20% for 2014. Since the project kicked off, 25% of the businesses receiving support have recruited new employees. Two-thirds hope to recruit new employees this year.

The young entrepreneurs said that “Forsa” had enabled them to acquire new knowledge and develop their business activities.

This was the point made by Jamal Moudni, the young manager of a company that specializes in gardening.

“My involvement in the Forsa program has had a positive impact on my professional life, particularly concerning my relationships with staff, clients and suppliers,” Moudni told participants at the Rabat event. “I now see things differently, and in a positive light.”

For his part, Mamoun Bouhdoud, the Moroccan minister responsible for small businesses, said that the government was willing to support this kind of initiative to promote entrepreneurship among the ranks of young people.

But according to economist Mehdi Chammami, few young people aspire to setting up their own businesses, and many of those that try end up failing or facing huge difficulties, due to the lack of support.

“The government and civil society have a duty to launch initiatives like Forsa to help young people propel themselves into the world of the entrepreneur,” he said.

“There must be practical training given to young people to show them the basic rules of business management,” the economist added.

Among young people, many hope that mentoring by business figures can help them realize their dreams of self-employment…[Full Story]