Magharebia reports on the recent bust of an ISIS recruitment cell and highlights Morocco’s efforts to counter violent extremists: 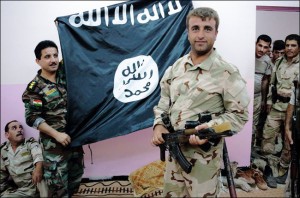 Peshmerga fighters pose in front of an Islamic State flag they took from militants at a military post about 30 kilometres north of Kirkuk, on September 13, 2014. Photo: AFP/Guillaume Briquet

The group was led by a primary school teacher and operated in Fez, Outat El Haj and the Nador neighbourhood of Zaïo, according to the ministry. It was broken up by the National Brigade of the Judicial Police (BNJP), with the help of intelligence provided by the Directorate General of Territorial Surveillance (DGST).

The recruits were being sent to Iraq and Syria in co-ordination with ISIS field commanders, including a Moroccan former terrorist detainee who is now a member of the group’s Sharia court, the interior ministry said in a statement.

The suspects were also plotting attacks against sensitive targets inside the kingdom, an interior ministry statement said. To this end, they reportedly received instructions on covert action and using fake IDs to make their criminal plan a success.

Mohamed Agdid, an analyst for the DGSN, confirmed in a statement to Magharebia that busting this new terrorist cell was part of a preemptive approach adopted by the ministry and DGSN to fight terrorism and protect the kingdom against the Islamic State threat.

“The cell managed to recruit some youths who hail from poor families, have a low level of education and live in impoverished neighborhoods in Fez and its suburbs,” he said.

“Morocco is adopting a security approach depending on precautionary measures and preemptive strikes. Citizens and civil society must help policemen in performing their duties in protecting citizens by reporting suspects and providing policemen and security authorities with all information. ISIS is a big problem threatening the security and stability of the entire region,” Agdid added.

“Morocco is monitoring many suspects’ online accounts, which link Moroccan youths to many people in the east and Gulf who are classified under the ‘terrorist threat category’ in their countries. Morocco is also monitoring suspicious bank transfers from Europe and the Middle East to Moroccans suspected of having terrorist intentions,” he said.

In his turn, Mountassir Hamada, a researcher specializing in terrorist groups, told Magharebia that the operation came amid a heightened security alert in Morocco…[Full Story]