A new survey confirms that Moroccans are increasingly tech-savvy, especially among the youth: 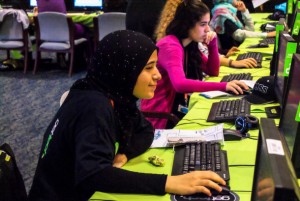 A fresh survey in Morocco on digital behavior revealed that 84% of respondents had at least one personal IT device, with nearly two-thirds owning a laptop.

Almost half of Moroccans own a desktop computer and more than a quarter own a tablet, according to the online survey of 2,500 people commissioned by Intel, the global tech giant.

The study was published in Casablanca on Tuesday (September 16th) and shows just how keen Moroccans, especially young people, are about advanced and high-performance technologies.

A majority of respondents said that they considered themselves to be creative and gifted with technology, but a large number of them (58%) said that their creativity and productivity was hampered by out-of-date machines.

Rachid Jankari, an IT and new media consultant, told Magharebia: “The interesting thing about this study is that it highlights the trend in the IT equipment market and its sustained growth, in particular due to the boom in purchases of tablets at a time when users are mature and diverse.”

That view was shared by Jihane Ghazali, who said that mobility was the dominant trend among young Moroccans who want to buy higher-performance mobile technology.

This marketing officer, who works for an IT company in Casablanca, added that it was important to note that the use of out-of-date machines and ignorance of the added value of latest-generation equipment were “factors that restrict productivity and creativity among young people”.

“Seventy-nine per cent of those who were surveyed believe they are creative, but 46% would have liked to be able to do more with their machines, such as producing photos quickly, making videos, creating art, developing applications or even composing music,” Ghazali said.

Karim K’tiri, the boss of a technological innovation company, highlighted the importance of new information technology in improving the school system and vocational training for young people.

“Modern technologies are becoming vital to the employability of young people and business competitiveness,” he underlined.

Young people in Morocco are following the development of latest-generation tech applications very closely, but access to these devices is problematic.

“I really want to buy a new computer but I don’t have the money, and I’m having a real problem updating my PC, which is over two years old,” said Ahmed Essaouiri, an economics student.

“I have a high-performance machine, but as a professional, I very often suffer from a slow and disastrously bad connection,” said Boualal Salim, a technical assistant at an insurance firm.

Meriem Lamhelli, a manager at a PR agency, agreed: “the infrastructure of the networks provided by operators leaves something to be desired.”

Morocco is behind the digital curve because of government policy, according to Imad Rahmoum, a member of the youth wing of the Socialist Union of Popular Forces (USFP).

“It is the government’s duty to promote new technologies to citizens and to continue to support the national plans that were previously launched, such as Infitah, Nafida and Injaj,” Rahmoum said.

According to the annual study of the IT market carried out by National Agency for the Regulation of Telecommunications (ANRT) in 2013, about 59% of households in urban areas own a computer and 67% want to replace their old machine…[Original Article]