A release by the U.S. State Department Special Presidential Envoy lists Morocco as part of the Global Coalition to Degrade and Defeat ISIL: 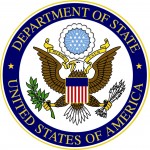 The ISIL Threat: A Global Challenge

The Islamic State of Iraq and the Levant (ISIL) has dramatically undermined stability in Iraq, Syria and the broader Middle East and poses a threat to international peace and security. ISIL continues to commit gross, systematic abuses of human rights and violations of international law, including indiscriminate killing and deliberate targeting of civilians, mass executions and extrajudicial killings, persecution of individuals and entire communities on the basis of their identity, kidnapping of civilians, forced displacement of Shia communities and minority groups, killing and maiming of children, rape and other forms of sexual violence, along with numerous other atrocities. ISIL presents a global terrorist threat which has recruited thousands of foreign fighters to Iraq and Syria from across the globe and leveraged technology to spread its violent extremist ideology and to incite terrorist acts. As noted in UN Security Council Resolution 2170, “terrorism can only be defeated by a sustained and comprehensive approach involving the active participation and collaboration of all States… which is why our first priority is to encourage others to join in this important endeavor.”

The Global Coalition to Degrade and Defeat ISIL

Over 60 coalition partners have committed themselves to the goals of eliminating the threat posed by ISIL and have already contributed in various capacities to the effort to combat ISIL in Iraq, the region and beyond.

The breadth and diversity of partners supporting the coalition demonstrate the global and unified nature of this endeavor. Below are some (this list is not exhaustive) of the partners that have joined this effort to date, and we expect the number to grow.