Morocco is at the forefront of exciting emerging markets, an ideal gateway to a booming continent:

[…] David Wyckham, London-based director for global frontier and emerging markets at HSBC, attribute’s Morocco’s increasing popularity among corporations to its “relative political stability, its favorable legal environment for foreign investment, the availability of skilled workers with wages much lower than those in the European Union, and its close proximity to Europe.” 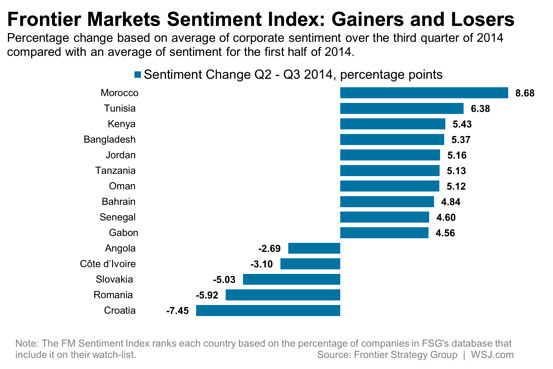 According to Mamoune Bouhdoud, Morocco’s minister delegate for industry trade investment and the digital economy, the automotive sector is experiencing double-digit growth and represents one of the key elements of the country’s export mix. But, he says, the production of complete cars is just the “visible part of the iceberg. There is a while range of SMEs working in this sector—suppliers for Renault in Tangier—and also huge exports of parts for factories in Europe.”

While Morocco’s proximity to Europe and its free-trade agreements with Europe and the U.S. are key factors in attracting foreign investment, Mr. Bouhdoud believes its relationship with Africa is an increasingly important factor. “Everyone believes Africa is the next area of growth,” he notes. “The problem is, there are a lot of countries in Africa and if you want to make your investment valuable you need to find a place where you can put your headquarters. You need to manage your risk. You need a strong country with great connectivity. Morocco could be this for foreign companies.”…[Full Story]