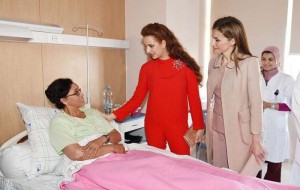 October is Breast Cancer Awareness Month in the US and around the world; and while the pink ribbon is less ubiquitous abroad than here in the States, the movement has gained significant global momentum, including in Morocco.

That’s thanks, in large part, to Princess Lalla Salma, wife of King Mohammed VI. Just as many of America’s recent First Ladies have made healthcare issues the cornerstones of their public agendas—First Lady Nancy Reagan focused on drug abuse prevention; First Lady Hillary Clinton pushed for greater access to healthcare; and current First Lady Michelle Obama has put childhood nutrition and fitness at the top of her agenda– Morocco’s First Lady has worked to make cancer prevention and treatment one of Morocco’s national healthcare priorities.

To that end, the Princess established the Lalla Salma Foundation for Cancer Prevention and Treatment in 2005 with the goals of improving patient care, promoting prevention, and supporting scientific research. Last year, the Foundation provided therapy for over 15,000 low-income patients and built two centers for gynecologic and breast oncology: the Sheikha Fatma Center at the National Oncology Institute (INO) in Rabat, and the Mohammed VI cancer treatment department at the Ibn Rochd University hospital in Casablanca. The Foundation has become a leader in Morocco’s breast cancer awareness movement, sponsoring public advertising campaigns encouraging women to get screened. Two of the 3.5 million Moroccan women targeted by the campaign have already been screened; and in 2013, 47% of the examinations were done during the three weeks of the October campaign. This year, the Foundation is aiming to get even more women to clinics for screenings.

Of course the foundation’s work is not limited to breast cancer awareness. The Foundation has also focused efforts on an anti-tobacco campaign. More broadly in 2010, in partnership with Morocco’s Ministry of Health and with the active participation of national and international specialists, the Foundation initiated the National Cancer Prevention and Control Plan (NCPCP)—a public health policy that subscribes to the World Health Assembly’s recommendations on cancer prevention and treatment. Two years later, Marrakech hosted the International Conference on Cancer Control in the Middle East and Africa (January 12-14, 2012) which, in collaboration with the World Health Organization and other institutions, focused on the prevention of cervical cancer and promoting greater access to healthcare in the region.

Obvious to anyone watching is Princess Lalla Salma’s unending dedication to the cause. She has personally attended these events and overseen the launch of many institutions and “maisons de vie” (including earlier this month in Marrakech) providing patients with expert care from doctors, psychologists and social workers, and has visited countless cancer patients throughout Morocco in a show of solidarity.