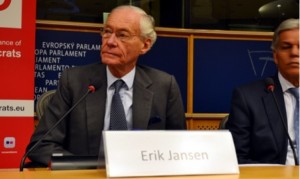 Autonomy is the “only honorable way” to settle the Western Sahara conflict, former Special Representative of the UN Secretary General to the Sahara, Erik Jensen, said Wednesday in Brussels.

“I have always been convinced that the only honorable way to settle the Sahara issue is autonomy”, Jensen said at the European Parliament during a debate following the screening of the documentary “Polisario: Identity of a front”, which provides accurate insight and objective view on the regional conflict over the Moroccan Sahara.

Autonomy is a rather “elastic” concept which “excludes both extremes: integration and independence”, which makes it a good solution to the Sahara conflict, “because it offers the Polisario and those who support them (in Algeria) an honorable outcome”, he said.

Mr. Jensen said that his five-year mandate as a Special Representative of the UN Secretary General to the Western Sahara has allowed him to better understand the ins and outs of this conflict.

He also Jensen noted that the challenges facing the region, the terrorist threats and the instability in the Sahel and the feeling of frustration and despair that could push young people in Tindouf camps to join terrorist groups underscore the urgency to find a negotiated political solution to the Western Sahara issue…[Original Story]