US and Moroccan forces participate in Exercise Saharan Express 2015, a U.S. Africa Command-sponsored multinational maritime exercise designed to increase maritime safety and security in the waters of West Africa: 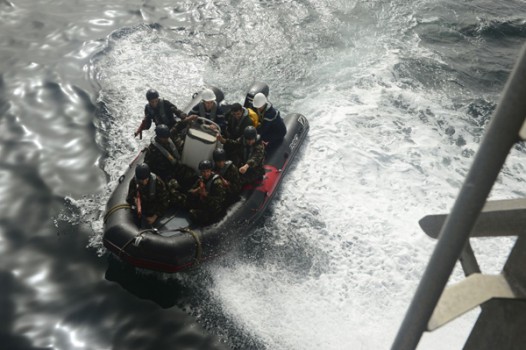 Bir Anzarane’s team boarded USNS Spearhead (JHSV 1), which has played the part of a target vessel throughout the exercise, to familiarize Moroccan forces through realistic scenarios for countering illicit trafficking.

“The Moroccans are key partners in the PSI mission and proved their professionalism and commitment to the initiative with an excellent boarding here on Spearhead.”

“It is rewarding to partner with Morocco and share an active role in exercising operationally through the Proliferation Security Initiative in this manner. We practice together through this exercise and others like it so we can train and demonstrate our capability and commitment to counter illicit proliferation activities in this vital region. This is a key part of Saharan Express and other exercises in the Express series. The exercise benefits greatly from our operational collaboration with the Government of Morocco on this important initiative, and we hope to continue that partnership in the future.”