A map of shooting locations for the TV series “Game of Thrones” shows which parts of Morocco fill in for the fictional cities of Astapor, Pentos and Yunkai: 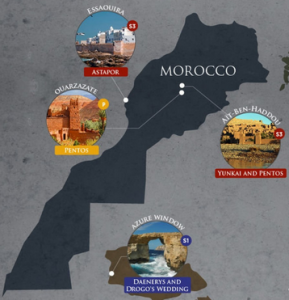 Graphic by Lawrence of Morocco. See the full graphic here.

The creators of the HBO Series “Game of Thrones,” which will air its Season 5 finale next week, cobbled together its magical landscape from locations around the world. This map, created by tourism company Lawrence of Morocco, shows some of the amazing locations that the directors chose for filming the series.

Many of the northern locations of Westeros were filmed on the blustery coasts of northern Ireland and Scotland. In the pilot, the Stark’s home of Winterfell was created from a collection of Irish and Scottish castles, including Castle Ward, Carncastle, and Doune Castle. Iceland’s stunning landscape was naturally the setting for scenes north of the wall.

In the first season, King’s Landing was filmed in Malta, an island south of Italy in the Mediterranean Sea. For the later seasons, filming in the capital was relocated to Croatia, which is also the filming location for Braavos in Season Five…[full story]