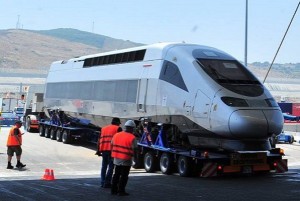 Railway Gazette reports that Morocco has received its first shipment of rail cars for what will become Africa’s first high speed train:

The first of 12 Alstom Duplex high speed trainsets for national railway ONCF was unloaded at the Port of Tanger on June 29. It had been shipped from the Port of La Pallice near La Rochelle in France onboardVille de Bordeaux, a roll-on roll-off vessel custom-built to carry Airbus A380 aircraft sections.

The double-deck trainsets are based on the TGV Duplex design that has been in service with French national operator SNCF since 1996, but adapted for local operating conditions.

They are to be used on Tanger – Casablanca services, using a 320 km route including a 183 km high speed line between Tanger and Kénitra which is being built for operation at up to 320 km/h.   From Kénitra to Casablanca the services will use a conventional line upgraded for speeds up to 220 km/h. [full story]