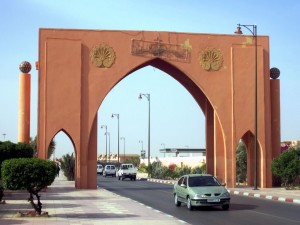 Photo of Laayoune gateway by David Stanley on Flickr.

As published today by ANSAmed, a subsection of the Agenzia Nazionale Stampa Associata:

Morocco celebrates today the 40th anniversary of the 1975 Green March, which took 350,000 citizens into the Spanish-occupied Sahara to call for freedom. The demonstration was called by King Hassan II and served a symbolic role in the fight for the country’s independence. After that day, Spain signed the Madrid Agreement and left Morocco with the exception of keeping Ceuta and Medilla as enclaves. The events planned include a star-filled football match with Diego Armando Maradona, Alessandro Altobelli, Francesco Toldo and Daniel Fonseca in the desert of Laayoune. Institutional meetings be will held during the day as well. Moroccan flags are omnipresent, awaiting the passing of military convoys. Moroccan communities in Italy will also be putting the flag outside their homes and shops in major cities.

King Mohammed VI will be holding a speech, the man dealing with the unresolved issue of the Polisario separatist movement. Diplomatic offices at the UN headquarters in New York are getting ready to try to achieve an agreement between the parties in conflict. Rabat wants large-scale autonomy under its sovereignty for the vast area that has less than a million inhabitants in it, while the Polisario wants a referendum for self-determination called. Despite the presence of the UN mission since 1991, the situation has not moved forward over the past four decades… [FULL STORY]