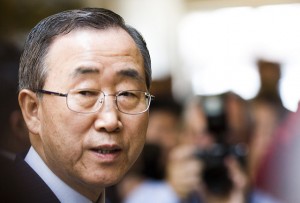 Ahmed Charai, who publishes the Moroccan news magazine L’Observateur and who is a member of the board of directors of the Atlantic Council as well as an international councilor of the Center for Strategic and International Studies, reacted to UN Secretary General Ban Ki-moon’s recent missteps on the Sahara issue in the Wall Street Journal:

… Two weeks ago, Mr. Ban waded into a less well-known conflict, in Morocco. For background: A leftist militia called the Polisario, based in and backed by the military establishment of neighboring Algeria, lays claim to half the territory of Morocco—the country’s Saharan south. Polisario waged a guerrilla war in the 1970s which never formally ended. Morocco’s monarch, Mohammed VI, has since invested billions into the development of the Sahara, so that it features glistening ports and infrastructure, decent housing and good schools. In the neighboring territory the Polisario patrols, the militia’s people still live in huts without running water or electricity, despite decades of generous international aid money from the U.N. and numerous charitable organizations.

The monarch’s plan for decentralization of governance kingdom-wide would grant Saharans self-rule. He also offers amnesty to militia members who agree to lay down their weapons. Such overtures have won an expression of formal appreciation by the U.N. Security Council, and been deemed “serious, realistic, and credible” by the Obama administration. The Polisario, offering no peace plan of its own, calls for continued “resistance.”

Enter Mr. Ban. On March 5 he visited Algeria and the Polisario camps in his official capacity and threw off the mantle of peace broker to become a party to the conflict. He declared Morocco a “colonizer” and an “occupier,” and flashed a “V” sign with the guerrilla fighters—which they understandably interpreted as a show of U.N. solidarity with their military campaign.

Mr. Ban’s actions should not be surprising. He has taken a neutral stance as Syria’s Bashar Assad killed nearly 500,000 of his own people. He stood on the sidelines as Russia’s Vladimir Putin invaded and annexed Ukraine’s Crimea. He oversaw toothless peace talks in Libya as the country collapsed into a failed state of multiple civil wars. Yet in Morocco, a conflict for which the U.N. itself has recognized the merits of a comprehensive settlement proposed by Morocco, he has effectively encouraged the perpetuation of armed struggle. [FULL STORY]