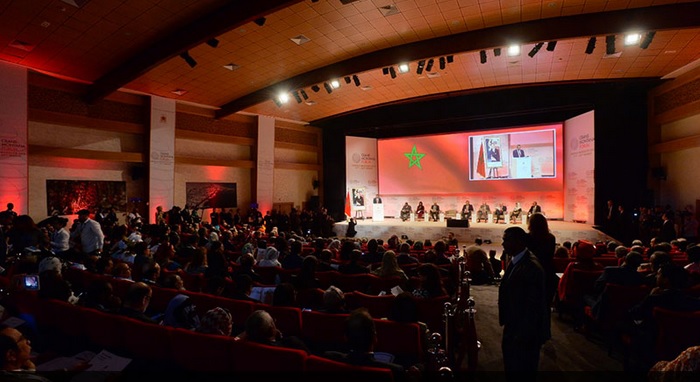 Washington, DC, March 22, 2017 (MACP) — From March 17-22, the Swiss-owned and Monaco-based Crans Montana Forum convened more than 800 foreign dignitaries from around the world in Dakhla, Morocco for its 26th event, themed “Africa and South-South Cooperation: Better Governance for Sustainable Economic & Social Development.” In a message delivered to Forum participants on his behalf by Ynja Khattat, chairman of the Council of the Dakhla-Oued Eddahab region, Morocco’s King Mohammed VI urged leaders to “put Africa and all developing countries at the heart of the international agenda.”

“Our overall objective is to make sure that the voice of a united, strong and determined Africa is heard and that it is heeded,” he said. “Africa owes it to itself to become a key partner in international cooperation mechanisms, and not just a mere object of this cooperation or a prize others vie for. Africa should no longer be perceived as a vulnerable continent, but rather as a driver of progress.”

Remarking on the theme of sustainable development and good governance in particular, the King said that while the world and the South face unprecedented environmental and development challenges, “Africa should have a say in this global debate. It should neither keep quiet nor allow itself to be dictated to, let alone be forced to choose between development and the preservation of the environment.”

“It is this vision that Morocco has chosen to champion as it prepares to host the 22nd Conference of the Parties to the UN Framework Convention on Climate Change (COP22) in Marrakech next November,” he added.

The King also remarked that the organizers’ decision to choose Dakhla as the Forum location for a second year in a row “has more than just a symbolic meaning. It bears witness to the fact that fresh momentum has been given to the vision we have of the Moroccan Sahara…”

The King was referring to his February visit to the region wherein he presided over the launch of numerous infrastructure projects, part of an $8 billion development plan designed to “make the Moroccan Sahara a hub for communication and exchange with sub-Saharan African countries,” as promised by the King in November. Projects included new ports, fish markets, desalinization and fertilizer plants, and road infrastructure improvements, to name a few.

The King explained to Crans Montana participants, “I wanted these structural projects to coincide with the implementation of advanced regionalization, following the recent regional elections, the establishment of bodies that were elected directly by the citizens and the provision of important constitutional and legal powers as well as financial and human resources.”