Last week the UN published the 2018 Human Development index (HDI) for 189 countries. Morocco ranked 123, down one slot from last year. The HDI provides an overview of the state of development of each country based upon four criteria: life expectancy at birth; expected years of schooling; mean years of schooling; and gross national income per capita.  A comparison with other countries in the region, as well as measuring its own HDI progress over time provides an interesting story of Morocco’s progress.

A graph of their progress shows HDI improvement from 1990 to the present for the four countries, with Morocco rated as an outlier. Morocco’s trajectory is impressive, but shows a slight slowdown from 2010-2018. Otherwise, it was on track to be at the same level as the other countries studied here. 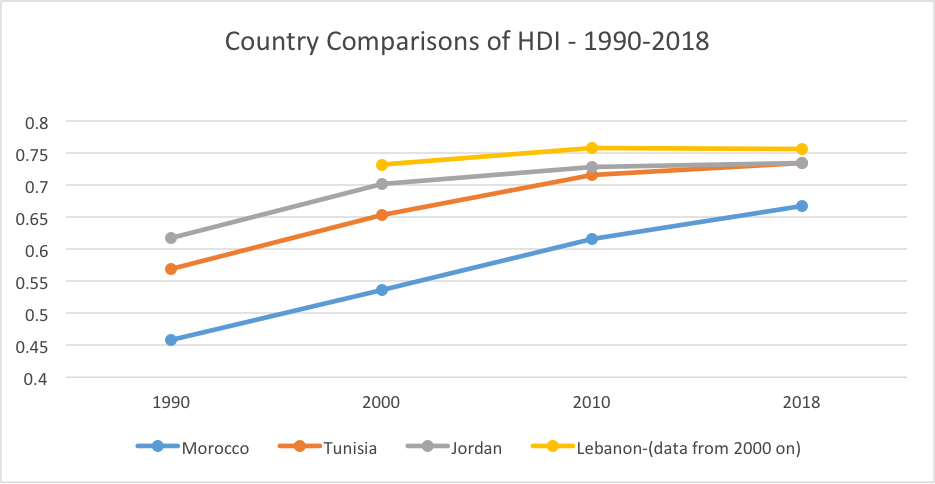 Upon further examination, we see a disparity among the four countries in the area of education and GNP/capita, with Lebanon being the only (and higher rated) outlier on life expectancy.

Morocco’s mean schooling for people aged 25 and older is half that of Jordan and two-thirds that of Lebanon and Tunisia.  This is a remarkable difference and highlights the reasons why King Mohammed VI of Morocco has shown great frustration with government agencies charged with educational issues in Morocco.  In his July 30th National Day speech he said, “We need to give strong impetus to school enrolment programs and combat school drop-out as of the next school year. These include … school enrolment support, early childhood education, school transportation, school canteens, and boarding schools… designed to ease the burden on families and to provide them with support to make sure their children continue to attend school and training programs.”

The HDI report clearly shows the challenging situation with regards to Morocco’s education. If this trend is not reversed, it portends a difficult future for the country’s growing young population.

Another statistic worth highlighting is the disparity on life expectancy, which calls into question Morocco’s lack of modern and adequate health services. Only Lebanon in this group has a life expectancy equal to the top countries of the world, which says something about their priority on health and university medical education. It is  becoming highly acclaimed for its health services and is also becoming a health tourism destination.

Morocco, on the other hand, is woefully behind on health issues and must prioritize this area if it is to properly address the health and welfare of its citizens, and attract foreign investments as foreign companies place a high premium on good health care for their employees.

Without attention to education and health, Morocco will not be able to compete for foreign investment and the jobs that come with it. Domestic discontent with government services in these areas will also continue. So while the Kingdom focuses on the direct investment issues like infrastructure, free trade zones, and investment incentives, the indirect social well-being of its citizens is now just as important for the prosperity and stability of the country.  The HDI report provides Morocco with good guidelines on what it needs to do and which areas it should prioritize.