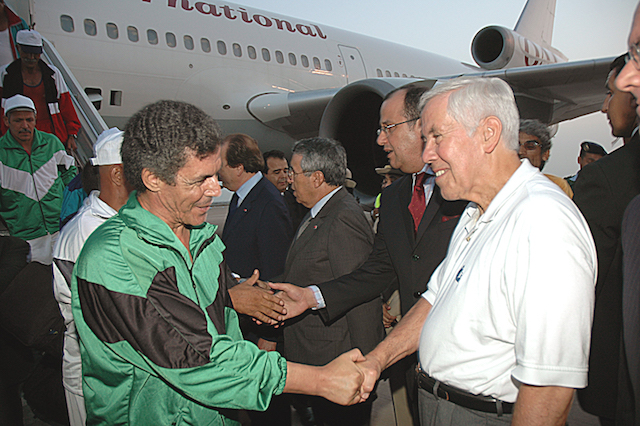 Senator Lugar greets a freed Moroccan POW upon his return to Morocco on August 18, 2005

In less than a year, America has lost two of its most honored foreign policy leaders: Senator McCain who passed away in August of 2018, and former Senator Richard Lugar who passed away this week at age 87. Few people are as respected for their bipartisan efforts as these men were.

Purdue University President and former Indiana governor Mitch Daniels, an Arab-American who served for years as Lugar’s chief of staff, said in a statement on Sunday that Lugar was “not just the finest public servant I will ever know, he was the finest person… He embodied all we can hope for in our leaders: brilliance of mind, purity of motive, stainless in character, tireless in the pursuit of duty. Incomparably knowledgeable about the world, he was first and always a patriot, utterly dedicated to the security and wellbeing of his fellow Americans.”

During his tenure as Senator, Lugarserved as Chairman of the Senate Committee on Foreign Relations from 1985 to 1987 and from 2003 to 2007, and as the ranking member of the committee from 2007 until his departure in 2013.It was during his second stint as chairman, specifically in 2005, that he touched the hearts of all Moroccans.

People may not know that Senators Lugar and McCain were involved in the release of 404 Moroccan Prisoners of War, believed to be the longest-held POWs in the world. They were held by the Polisario Front, a rebel group formed with the backing of Algeria and Cuba during the Cold War to fight for the Western Sahara territory that Morocco reclaimed from Spain in 1975. They had been held an average of 17 years, some for nearly 30, and remained so even though the hostilities had ended some 14 years earlier.

In 2005, the Moroccan American Center launched the Free Them Now campaign with the objective of freeing these last remaining POWs. It documented flagrant violations of basic POW rights and protections as provided by the Geneva Convention, as well as accounts of forced labor, torture, mutilations, and summary executions as recorded by leading international organizations. Thousands of people signed petitions calling on the Polisario leadership to release all remaining prisoners without condition.

Upon learning of these atrocities, Senator McCain became personally involved, urging the Polisario “to restore these individuals’ freedom and allow them to return to Morocco to live the remainder of their lives in dignity with their families.”He expressed his hope that “these captors can be swayed, not by political pressures or promises, but by what is undeniably just and humane in the eyes of the world community…”

The deluge of press that followed around the world, as well as demonstrations in Morocco and Washington, would force Algeria to pressure the Polisario to seriously consider releasing the POWs.

On August 18, 2005, in an action led by Senator Lugar, chairman of the Foreign Relations Committee – and with the support of President George W. Bush – US planes were sent to retrieve the 404 POWs from the Algerian-backed Polisario prisons. Accompanied by Senator Lugar, they arrived in the city of Agadir, Morocco, to a hero’s welcome led by King Mohammed VI. Their decades-long brutal suffering had finally come to an end.

Senator Lugar will be remembered in the US for many achievements, as a foreign policy sage who had an uncanny ability to work in a bipartisan fashion on foreign policy issues, and especially for his work on nuclear dismantlement. He was awarded the Presidential Medal of Freedom by President Barack Obama, who said, “In Dick, I saw someone who wasn’t a Republican or Democrat first, but a problem-solver… an example of the impact a public servant can make by eschewing partisan divisiveness to instead focus on common ground.”

In Morocco, he will forever be remembered for his human decency and humanitarian effort to take the time to fly to Algeria in a US Air Force plane, secure the release of all 404 Moroccan prisoners of war, and personally bring them safely home to Morocco. America and Morocco will miss him but will never forget him for his noble accomplishments.