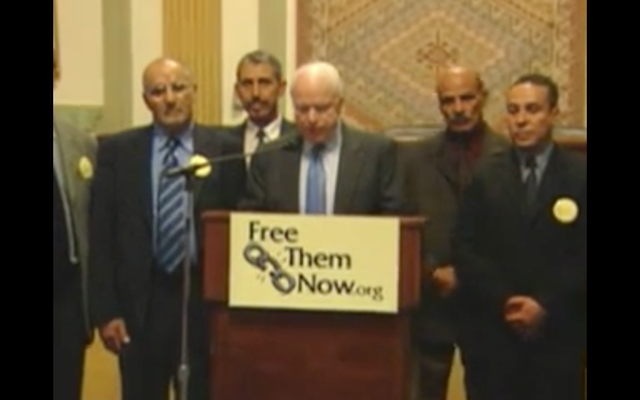 Sen. John McCain (with Captain Ali Najab on the left) calls for the release of the last remaining Moroccan POWs from the Polisario camps in southern Algeria at a press conference in August 2005

In his newly released book presented at the national library of Morocco this month, Army Captain Ali Najab recounts the dire circumstances of being held in a Polisario prison for twenty-five years.

My colleagues and I at the Moroccan American Center (MAC) can attest to Ali’s emotional reunion with his fellow prisoners of war and their families, as we were intimately involved in the release of the remaining 404 Moroccan POWs, held an average of 17 years, some for nearly 30 even though hostilities had ended 14 years earlier. My colleague Bob Holley has written extensively on their release, and I wrote in a tribute to Senator John McCain in August of 2018 on our efforts, which are recounted here.

In 2005, MAC launched its Free Them Now campaign with the objective of setting these remaining Moroccan POWs free. As part of this effort, we documented flagrant violations of basic POW rights and protections as provided by the Geneva Convention, and provided accounts of forced labor, torture, mutilations, and summary executions by the Polisario rebels, as recorded by renowned international organizations.  As a result, thousands of people signed petitions calling on the Secretary General of the Polisario to release them without condition.

During this time, Ali and four of his fellow previously freed POWs were relentless in their efforts in Washington, interviewing with human rights organizations, Congress, and the media to secure the release of their fellow prisoners. Their efforts also included going to Miami to appeal to the Cuban American community, Cuba being a main supporter of the Polisario. They were interviewed on the most popular Cuban radio show and were told after the interviews that there had never before had so many listeners call in to the program to express their support.

While MAC won the prestigious Sabre Award for the Best Public Issues Campaign that year, it was the efforts of Ali and his colleagues that were critical to the success of the campaign.  Without their dedication, relentless and heartfelt effort to free their colleagues, it is not certain that this campaign would have succeeded.

Upon learning of these atrocities, Senator John McCain became personally involved, urging the Polisario “to restore these individuals’ freedom and allow them to return to Morocco to live the remainder of their lives in dignity with their families.”  On May 16, 2005, he wrote a letter to the head of the Polisario demanding the release of the POWs. He cited the indignation of several respected international organizations, including France Liberté, Amnesty International, the International Red Cross and the UN Security Council. He ended his appeal with the following quote by Moustapha Sirji, one of the Moroccan POWs:

“I ask the others if I am a human being here or if I am an animal. We are Muslims. We believe in God. We pray. We are not rocks. We are living in this inferno. We are the forgotten victims of this drama. We have our lives to live. I have lost my youth. We have lost our families. Every time we receive letters, someone has died. How long is this going to go on? Please, will somebody notice us.”

The deluge of press that followed around the world, as well as demonstrations in Morocco and Washington, would force Algeria to pressure the Polisario to reconsider its actions.

On August 18, 2005, in an act of transatlantic diplomacy led by Senator Lugar, then Chairman of the Senate Foreign Relations Committee – and at the request of President Bush – US planes were sent to retrieve the POWs from the Algerian-backed Polisario prisons. The 404 men arrived in the city of Agadir, Morocco, to a hero’s welcome. Their decades-long brutal suffering had finally come to an end.

Later that year, MAC met with several of those POWs who came to Washington to attend a Moroccan ceremony honoring Senators Lugar and McCain and US Representative Mario Diaz-Balart for their personal involvement in ending this tragedy. One of them told us, “When I was captured my daughter was eight years old. When I came home my daughter’s daughter was eight.”

Due to death and divorce, many of the POWs had little or no family to come home to. Their reintegration hasn’t been easy since, but for many months after their release, we received letters from several of them thanking God they were being given a chance to live the rest of their lives with their families.  Now you can read about their story in detail in Ali’s 562-page account of this sad chapter in Morocco’s struggle to recover the territory it lost to Spanish colonization.