Morocco is in the midst of a renewable energy boom. After years of planning and commitment to the 2009 National Energy Strategy, which plans to draw 42 percent of the country’s energy needs from local renewables by 2020, more and more wind and solar projects are coming online, while investments continue to roll in for even more production.

Drawing on domestic, regional, international, public, and private sources, Morocco is not only building an industry from scratch, it is also tapping into new domestic energy sources – on a much more sustainable basis than its oil-exporting neighbors. Because is has been historically bereft of exploitable fossil fuels, Morocco is more dependent than its neighbors on energy imports — to the tune of importing 95 percent of its energy as recently as 2011. Demand for power is increasing as a result of Morocco’s successes in rural electrification, which extended electricity access to 98 percent of the population, and the country’s growing and modernizing population which requires more energy and therefore more costly oil imports.  It is this dependency that drives Morocco’s comprehensive energy plan, which will fundamentally change the country’s energy landscape. 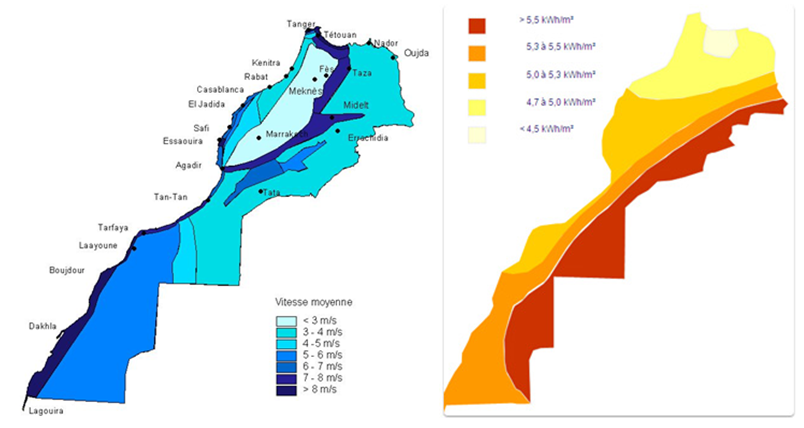 One of the keys for Morocco is facilitating foreign investment. The 2011 ‘13.09’ Law was adopted to promote large-scale renewable electricity generation projects by establishing a legal framework for private enterprise “to produce electricity from renewable resources and to sell the electricity to industrial clients metered to the Kingdom’s national energy grid.” Many of these deals are made on a build-own-operate-transfer (BOOT) basis, and now Morocco is integrating itself into production and creating local supply chains, via photovoltaic panels for solar and massive turbine blades for wind farms.

Morocco’s strong continued interest in supporting the renewables boom speaks to its commitment and growth of the sector. Morocco has had “no problem” drawing in investors and bids from a broad array of companies and international finance institutions for projects across the country, including in Western Sahara. In just the last few months, several new investments have been announced.

An exciting new project by Masdar and Morocco’s Office National de l’Electricite et de l’Eau Potable (ONEE) will utilize solar technologies to further expand rural electrification, providing power to 17,670 homes in 940 villages. The African Development Bank (AfDB) announced a $250 million loan to support Noor-Ouarzazate Concentrated Solar Power (CSP) project Phase-II (The World Bank is also pitching in $519 million), which will have an aggregate capacity of 350 MW. The AfDB and World Bank also supported Noor-I, the first phase of the project, which is slated to begin production this year. Also recently, the European Union in conjunction with the European Investment Bank (EIB), the European Bank for Reconstruction and Development (EBRD); along with the Agence Française de Développement (AFD) and Kreditanstalt für Wiederaufbau (KfW), just pledged €20 million in March for small-scale residential and commercial projects in the renewables sector. 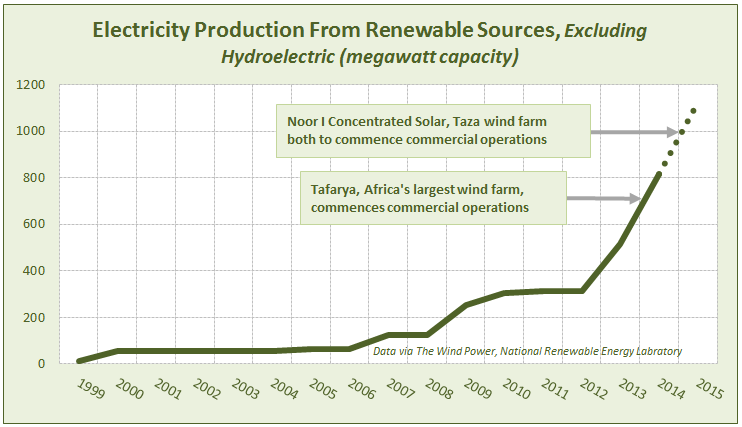 The Noor CSP project, once completed, will be the world’s largest solar park. The Tarfaya wind turbines, Africa’s largest wind farm, commenced commercial operations at the end of 2014. These achievements are already making a big impact—Tarfaya alone could power a city the size of Marrakech.

With many more projects in the works, Morocco is not only getting closer to its 42 percent goal, but it may soon become an exporter of renewable energy. Morocco is already connected to Spain’s power grid in the north, and in the south, is working to connect into national grids that will tie into the Power Africa system.

Morocco’s sustained commitment and vision has resulted in the near-unimaginable—the creation of an energy industry from scratch. That the country is transitioning from an energy desert to an energy exporter in just over a decade should serve as a model for any country looking to become more energy independent. Morocco has proved that all it takes is the sustained will to make that vision a reality—and a bit of sun and wind, of course.